The miles and miles of rivers here make for Manitoba’s finest grayling habitat. Boulder-laden with strong flow, it is the perfect environment for a world-class grayling. Most rivers are easily accessible and wading is not usually required. The bug hatches are tremendous and make the grayling here fat as they gorge themselves. North Seal grayling are beautiful, with a purplish gunmetal hue to their bodies, and fins painted fluorescent pink, purple and blue, each Nature’s finest watercolor. The flowing waters here can wow even the most experienced fly-fishermen. The largest grayling ever caught here was 24″ and 14-18″ fish are the norm. 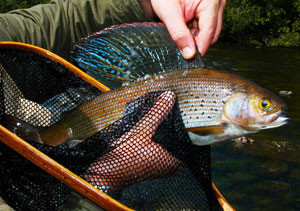 All of our Lodges and Outposts offer all 4 Trophy Species.

Because the North Seal river system connects all of the lake together, we benefit in having all species moving throughout the system. All of our camps have 4 species plus others like whitefish and burbot. We can guide you in catching these trophy fish on any of our lakes.

Our season opens beginning of June and closes in September. General fish movement patterns happen during the coarse of the year and happen fairly rapidly. At the beginning of June, after the ice on the lakes breaks up, the big and small fish are ravenous and are sunning in the cold shallow water. Smaller grayling are feeding on nymphs and zooplankton. The larger fish are feeding on eggs , baby fish and whatever is hatching above water.  Mid to late June, weeds start growing in the shallow areas, the water begins to warm and the grayling line the banks of the rivers feeding on caddis, mayflies, ants and terrestrials. Early July to beginning of August the water is warm and  smaller fish can still be found in the shallow areas. The rivers have more variety of fish in them now like walleye, whitefish and small pike looking for opportunity. If you’re using a spinner you can catch any of these which makes the wet or dry fly the best way to catch grayling.  End of August to beginning of September the fish are coming back to the shallows to feed in the warmer water before winter. The lake is also turning over bringing the lake trout up to shallow water and rivers. Grayling are feeding ravenously before winter.

Flyfishing General fly advise:
The most successful fly from June – August is #12 caddis to #8. The Bigger the fly sometimes produces the bigger Grayling. Another favorite from July to August is the green sparkly Chernobyl ant. If you can tie this or buy this you with catch lots of Grayling. All Nymph drops work as well but minnow streamers and dry flys work best for the big bombers.

Grayling are in the rivers and easily fished with nymphs, dry flies or small spinners.

Grayling are in the rivers, easy to access after water levels stabilize. Bug hatches (the good ones) are tremendous. Lots of Caddis, mayflies and mosquitoes. Fish are literally right in front of you everywhere off the rocky shore.

Grayling in the rivers, are at their peak feeding, smashing any dry fly that happens their way.

Grayling fishing continues with the same consistency from August. They are feeding for winter now.