Bain Lake Deluxe Outpost sits on a major junction of the North Seal River, one of Manitoba’s greatest watersheds.

Through Bain and it’s connected sister lake Belsham, the North Seal connects with 5 other river systems on its way to Hudson Bay.

Guests will enjoy over 30 miles of virgin waters, most of it never having seen the lure of a fisherman. Bain was formerly a private, rarely used camp hosting no more than 15 anglers a year. Bain has produced Lake Trout up to 50 lbs, Walleye up to 8 lbs., Grayling up to 4 lbs 11 oz and Northern Pike up to 38 lbs.

Past guests often refer to Bain as the 5 year camp, meaning with all the vast amounts of water to be explored here, it would take 5 years to cover it all. For those guests who quality and variety, and a ton of water to explore…Bain Lake Deluxe Outpost! 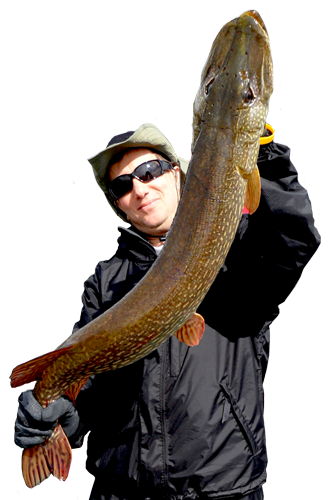 Whether you are a die-hard northern pike hunter, lake trout fanatic or just like to sample all of the menu, we have a plan for you to take home the memories of a great fishing adventure. Our lakes are teeming with trophy fish in all of these species. While these core four are what guest rave about there is the occasional trophy whitefish or burbot. Let us know what your specific fishing desires are and we will help design a trip to accomodate them.

Now in its seventh year of operation, Bain Lake Outpost is a perennial favorite. Though basic for a Gangler’s camp, when compared to the competition, Bain rises head and shoulders above all other outposts. Guests return here for its unforgettable ambiance and mile after mile after mile of trophy water.

Located on a major junction of the North Seal River, Bain is fed by five river systems and is connected to Belsham Lake. Bain offers modern bedrooms and bathrooms, spacious living areas and a separate kitchenette. World-class waters, world-class camp.

The camp consists of three newly refurbished cabins hosting up to 12 people a week. Like our other outposts, the cabins feature modern bedrooms and bathrooms, living areas, separate kitchenette, continuous electricity, custom-made Alumarine boats and satellite phone on location. Food is included like all of our other camps.

At Bain, We have opened the portage to Foord Lake, a huge body of water where the Fergus River enters Bain. That spot has long been a favorite for Bain grayling fishermen. The Fergus system pours volumes of water through it and we expect Bain guests to enjoy an incredible fishery on the Fergus system. Foord Lake is accessible via a short portage from Bain Lake.