The supplies flight was canceled yesterday because of fog in Thompson, as well as extreme cold conditions. It is re-scheduled for this afternoon but I haven’t heard from the dispatch yet. Weather quite different here, it was clear skies here in camp and the warmest it’s been in two weeks. After the new moon on Thursday, the temperature has been rising and what a relief. It’s been bloody freezing. The below forty and minus sixty wind chill factor made going outside a dangerous undertaking with frostbite in minutes. Even the fuel additive stuff wouldn’t pour. You have to blow the ice out of your nose because you can’t breathe. No joke. If you’ve ever experienced cabin fever, I was starting to show symptoms, like talking to the birds through the window.

Success! The plane arrived and I’m one happy camper. Not that I was going to starve, but some fresh fruit and vegetables are a welcomed luxury. Not to mention, a bottle of Bordeaux and New York cheese cake, I’m in northern heaven. The only thing missing is a room full of guests to share a meal and inspire extravagant conversation. I’ll just have to imagine that part, in silence.

I was waiting on the runway, ready to take some photos of the plane landing, when it flew right over me and touched down out of sight way down the airstrip. I heard him shut off his motor and he give me a whistle so I hopped on my skidoo and went to join him. He told me he didn’t want to turn around because of the deep snow. I was glad that I had made a circular loop with the snowmobile the other day and he stopped right beside my track. Perfect. We didn’t talk much as we unloaded the supplies, apart from “Hi there, how’s it going?” and then “well, I guess we’ll see you in the spring”. I had this idea that we would chat for a bit. Not a chance, he flew off as quickly as he had arrived. I wanted to get some photos of the plane taking off but my camera-phone froze on me, so I was left there alone on the empty runway like a scene out of comedy central. Anyway I did snap a few pics but nothing as spectacular as I had planned. 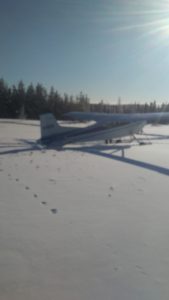 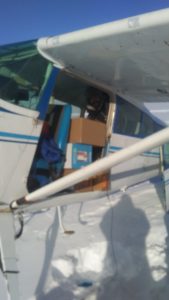 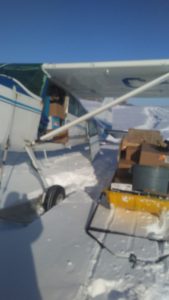